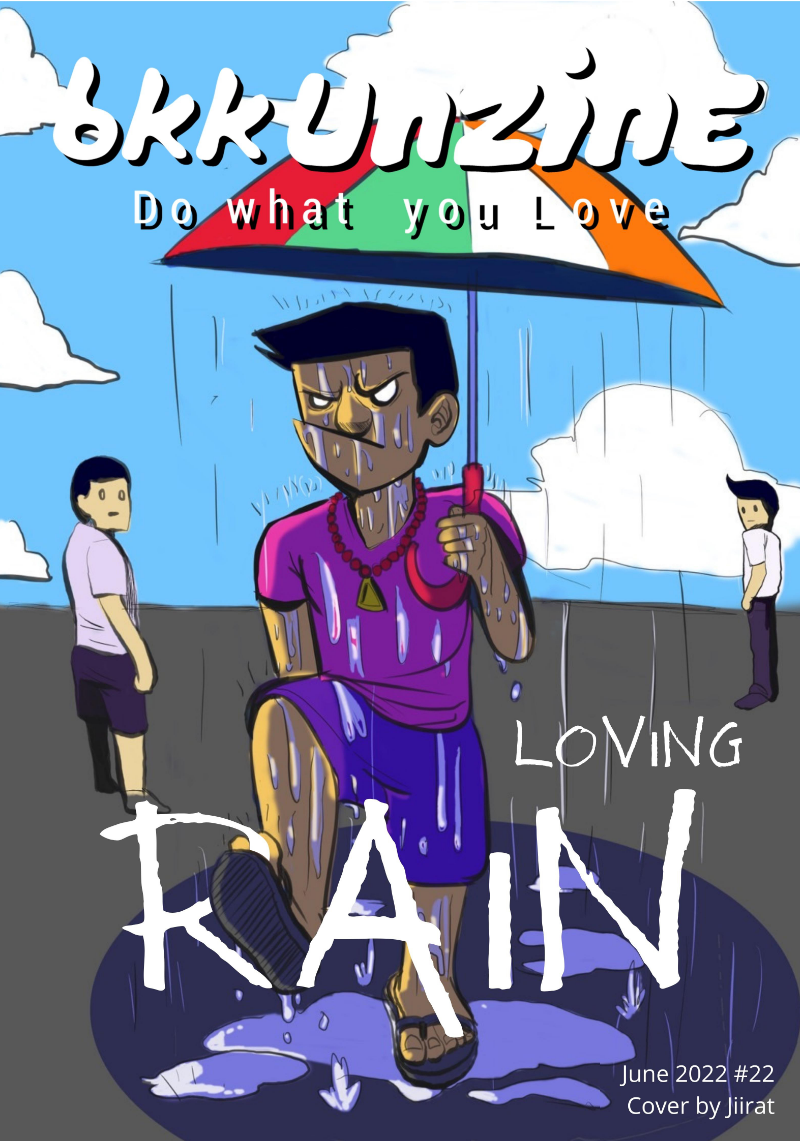 Creating on a rainy day sheltered by your thoughts has its comforts, we asked our readers to vote on the theme and they chose RAIN trusting that our bkk UNZINE art magazine will provide shelter for their precious artwork.
And what a collection to warm OUR thoughts but also to stir them. We were particularly equally impressed and honored to receive so many submissions in just a week after announcing the theme. If we are blessed with this kind of energy, we believe we will become creatively unstoppable. Sometimes even the rain is not on schedule and it’s seasonal but our community’s willingness is constant.
Get yourself a warm tea and please enjoy.

If you are an artist and you want to be part of our artist community, the next theme for May issue #21 is “COMICS”, you can submit your artwork at this link:

Artists in this issue 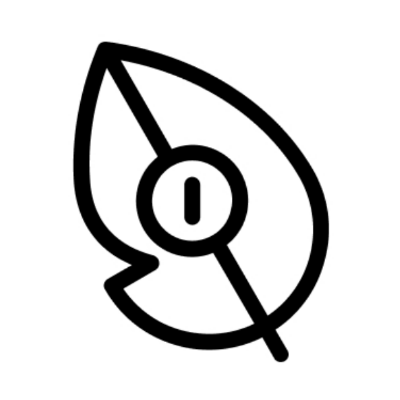 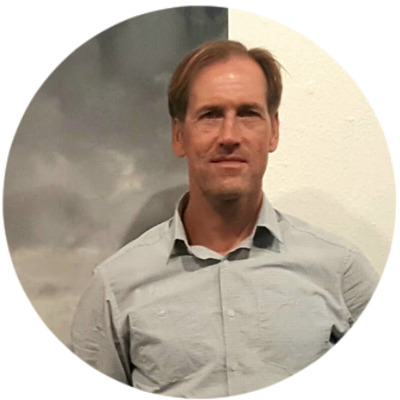 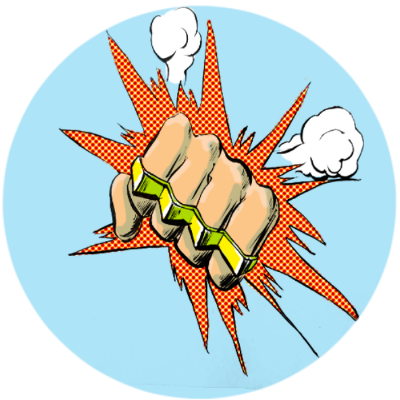 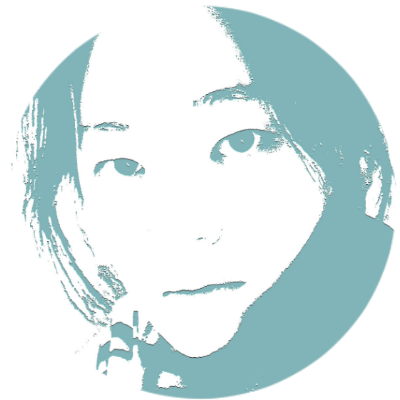 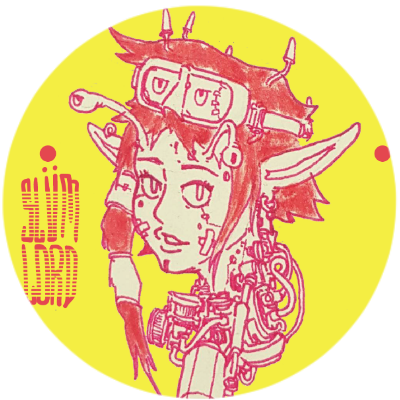 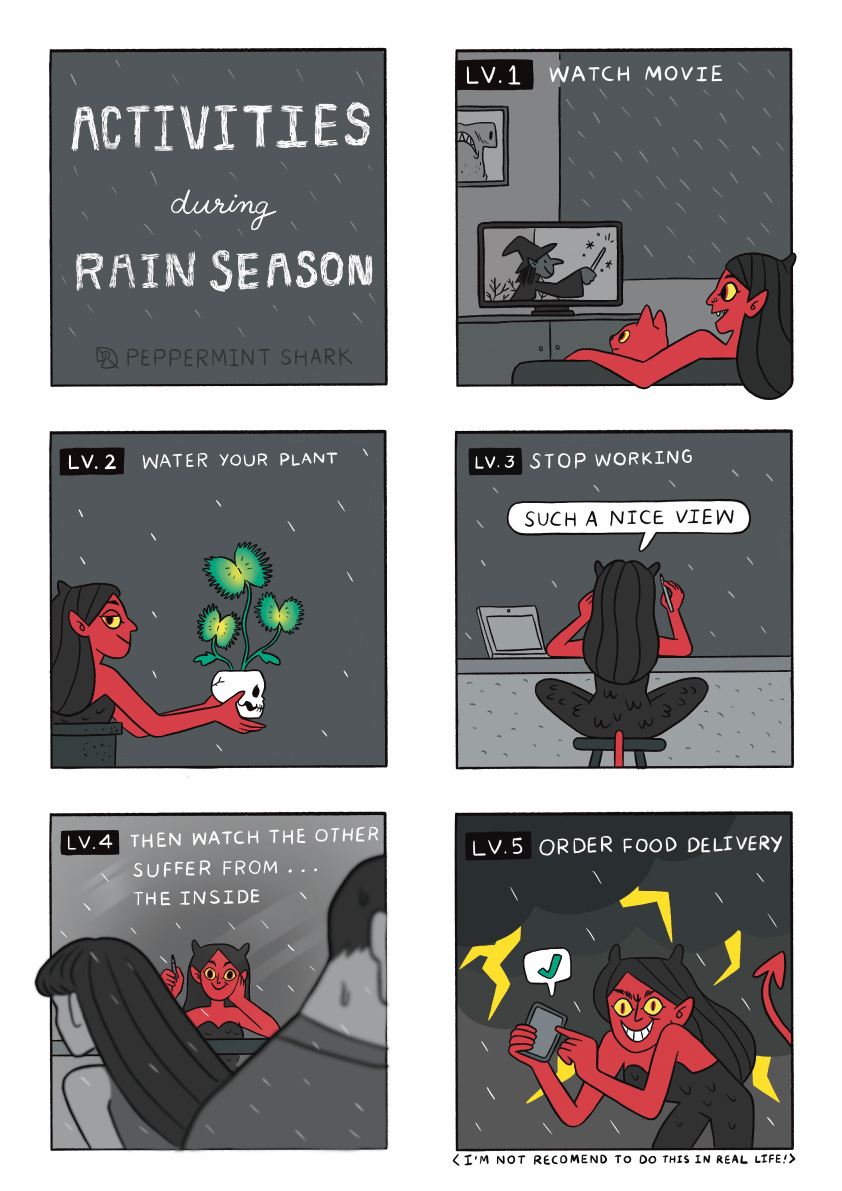 Created in Procreate Some people think rain season always be so lame but I guarantee that we still can have a great moment. 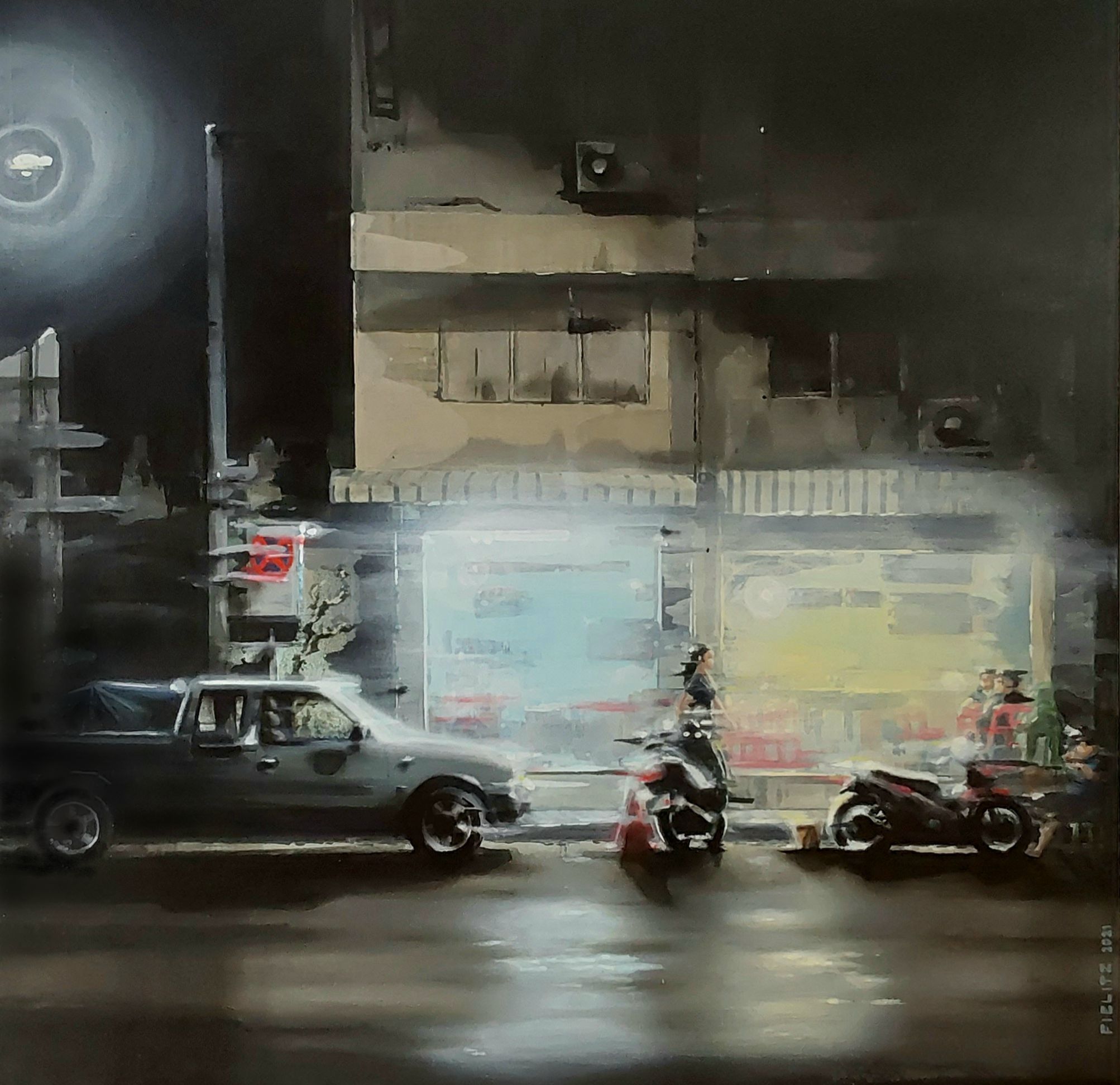 Acrylic on Canvas, 100 x 100cm
This painting depicts any evening street scene, anywhere in Bangkok. Any food shop, any soi, “any place”, just after the heavy rain..

II
And if in Butcha, yesterday,
It was as they allege—
Flechettes, lethal darts from artillery shells,
Reverberating upwards in ground-defying gravity,
Raining up on residents–
Now, on outskirts nearer to Kiev,
The projectiles are merely the downward rain,
Specious purity that falls belligerently
But harmoniously, like a mad percussionist
On the tin awning of this makeshift hospital.

In a world such as this
Where what seems bad is
Sometimes serendipitous,
And what seems good in fruition
Rarely materializes beyond conception,
Who could say with certainty anything
Let alone which is worse
–this place or death?
Would it not have been better
To have had no hospital care whatsoever–the gangrene areas
Having been cut out in such a way that
Scalpel was no different than a rusted a penknife
When the only anesthetic was whiskey,
And the gangrene was the whole of the leg, the amputated whole?
But it is as it is; adapt one legged man, if you care to live at all,
Or die. Bite the bullet, so to speak, to stunt the pain.

Whether my mortal susceptibility will come about this night
Is unclear with immune system being less active in the rain
And the miasma of bacteria and viruses downed and conjoined with the Infections in the amputated leg.
I can’t endure much more of this
Or the liquidated pounding of the roof and thus
I should go out with the thicket of the pall of the night.
How many more hours
There will be of existence
Beyond the days
After the medical severing of the limb,
God only knows, or if
The horror could drag on weeks
Before ultimate demise.

The purity that is thought of as the rain makes rain a misnomer.
The flechettes of precipitation shrapnel
Through the night skies in the reign of men.
Better if monkeys had gained hegemony,
Better if the rain would do more than speak of death
But bring it about hurriedly, instead of insidiously, and not just for me
But the whole warlike race (chimpanzee warfare, not guerrilla warfare).

Pain pills rationed, screams are censored here.
When about to scream,
One needs to mute it by biting into a sock, so the nurses say,
As they remove the bedpan–
My defecation also an outlier:
Crumbled dust, floating flakes in the fetid
Liquid nastiness of being
Like the pulverized state of the me to be when dead.

Inexorable rain, each drop imbued in the travail of memory and thought
But storms such as this have always been mine to bear–
Family abuse, invective of sadists, and a child
metamorphosed into a cockroach
At their heels.
But with a bit of cotton candy of a few good memories–
Card games, and the like, with family members
During blizzards several years in a row,
Amongst other things, makes the abused
Want to return to what once was as though it were worthy of replay.
Mother–Mom come to me.  Mommy, I have lost my leg….the agony, both Physical and mental
Is unbearable…the child is in the man, and calls out to the maternal protector
And the paternal God, if any,
When the camouflage of manhood is eviscerated.
Emasculated, I am ashamed.

The pounding of the rain is a hypnotic percussion.
It would force even the healthy
Into their sordid, respective pasts.
Twenty years old, am I, but with
Relationships with women few
And having had fewer still–
All those years to be of varied experiences stillborn.

Outside, rain mixes with the dirt,
Slippery as ice,
And the Americans, with Europe,
Slide ever so slowly into the slime of a third world war.
Flatchettes of rain reigning supreme
Rain down perpetually;
And entities,
Micro and macroorganisms alike,
Germs, insects, stray dogs, and men
Are afraid—

Afraid of the creative force that comes about
In wanton destruction
That once gave dinosaurs at one time,
Man another,
Hegemony,
Destroying, producing, and destroying life indiscriminately. 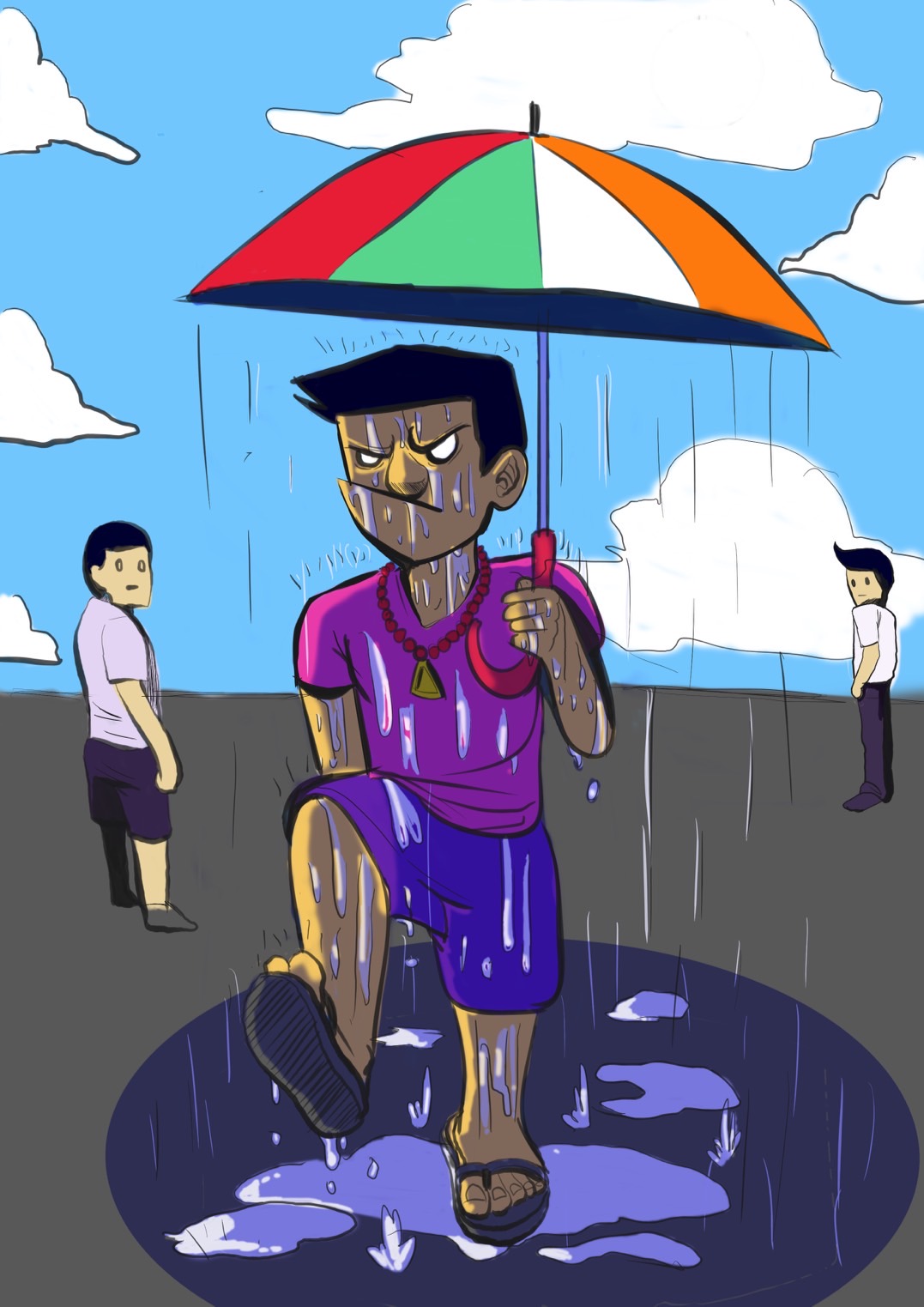 Digital painting (Size A4)
This is the image came up through my mind. 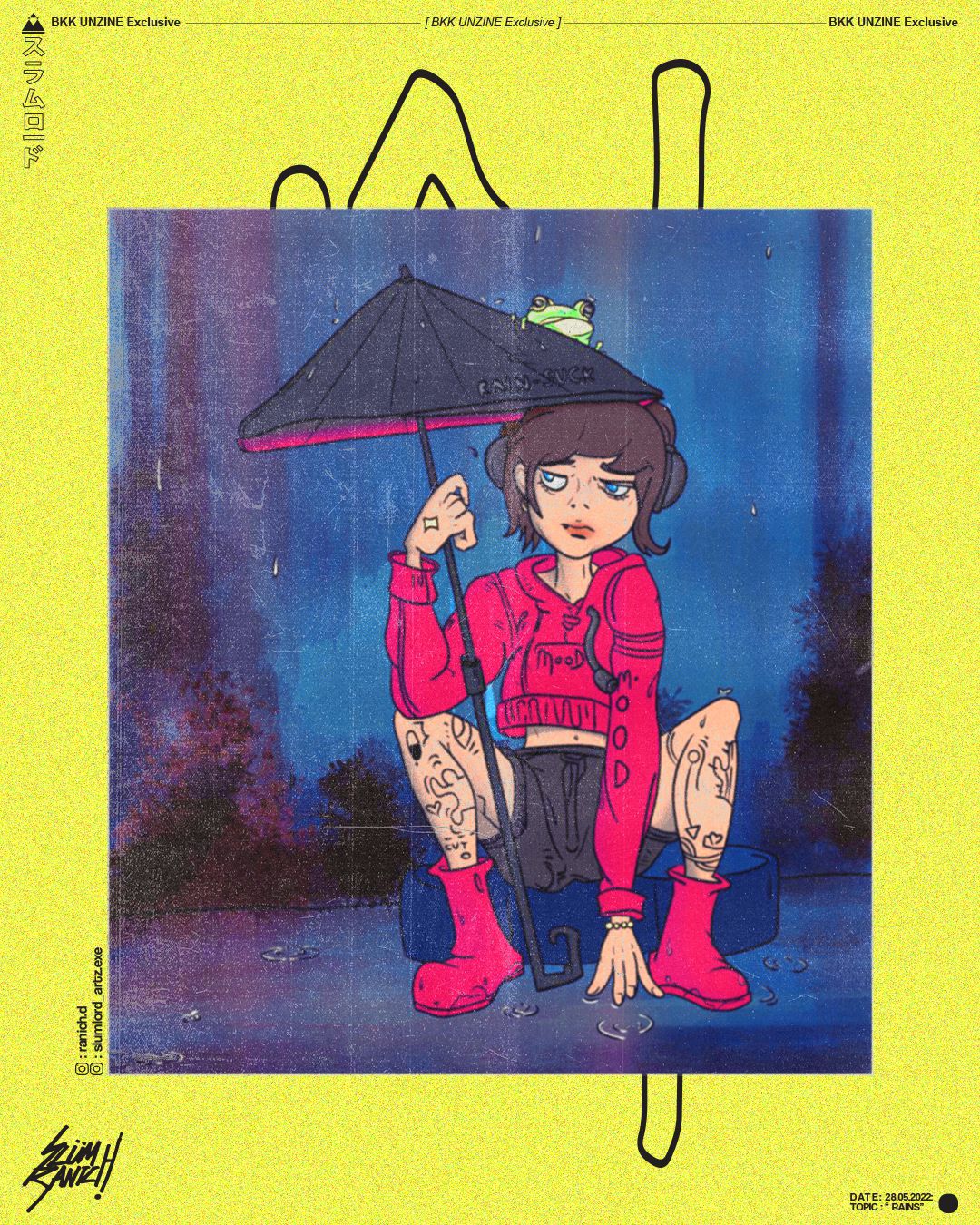 Ahh…Yes , The most annoying Season in Thailand.

A rainy evening in Bangkok

I re-edited this clip I shot while testing out the back then newly bought Sony lens.
The vibes this song and video provides instantly transports me back to those moments just admiring people adapting to a sudden downpour in Bangkok. 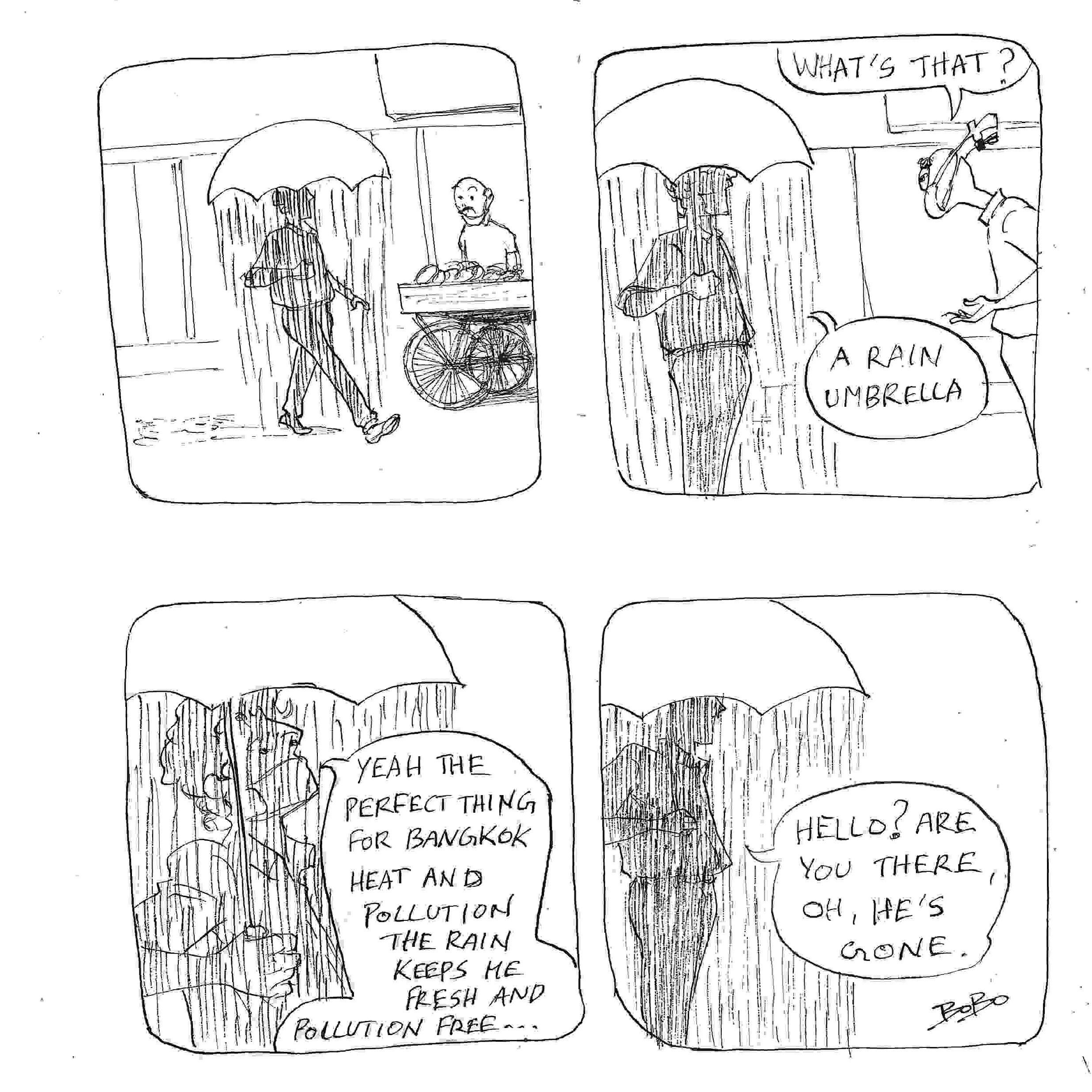 Tech pen on sketchbook paper
I heard that the rain is a good remedy for pollution. In a polluted city like Bangkok we don’t need more air conditioners but more rain umbrellas. As you can see I have great ideas there just isn’t anyone to listen to them.

Guardians of the Oasis 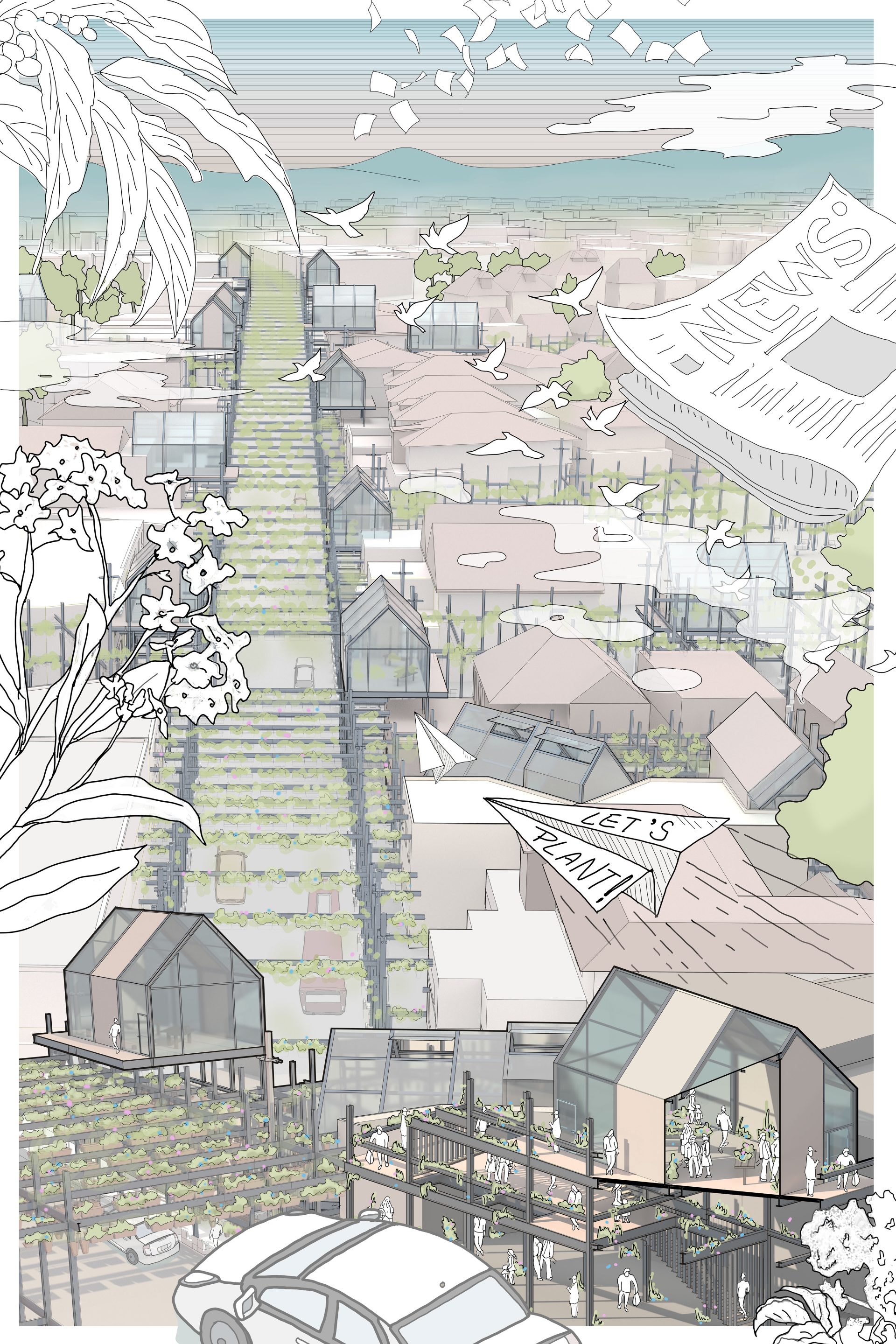 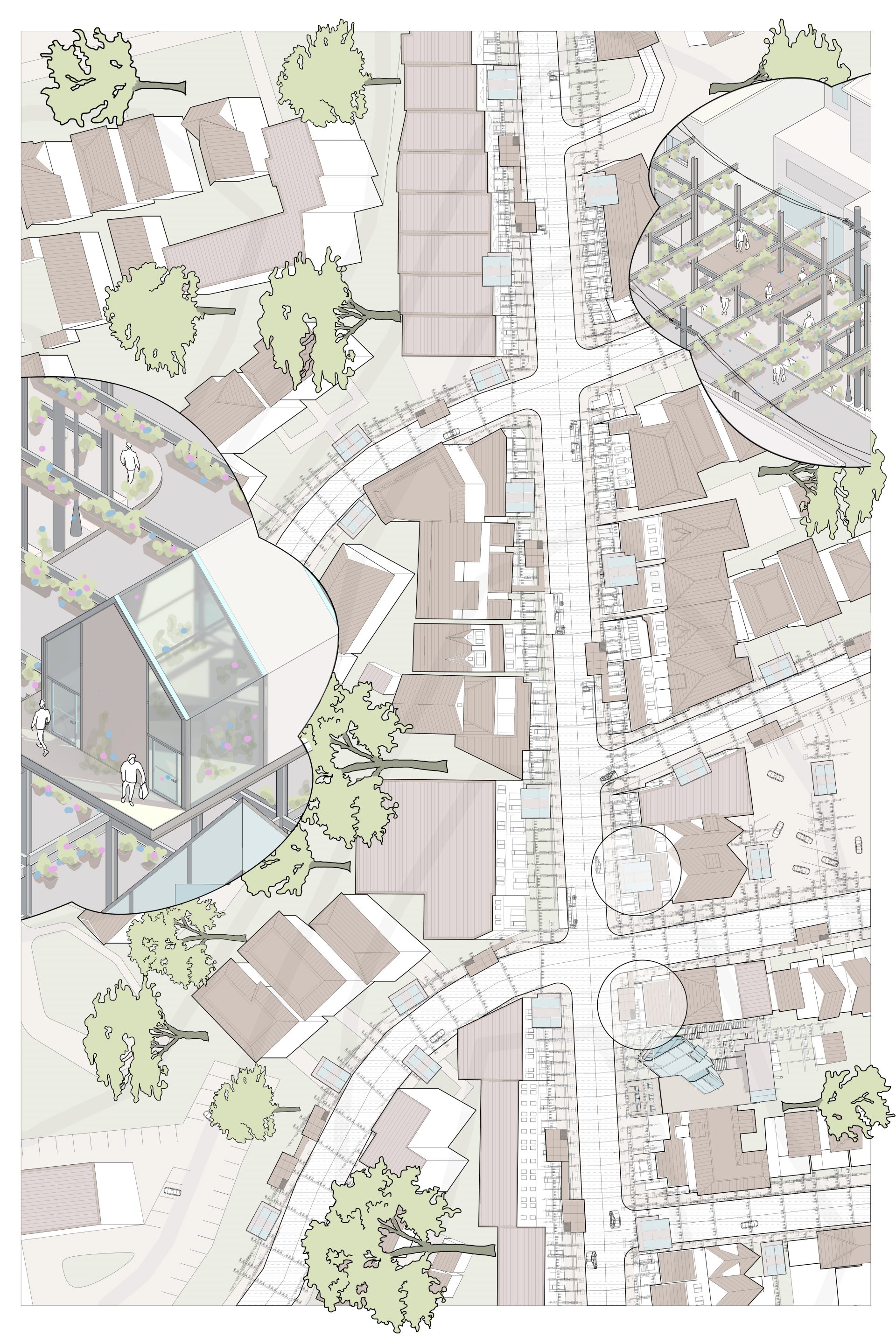 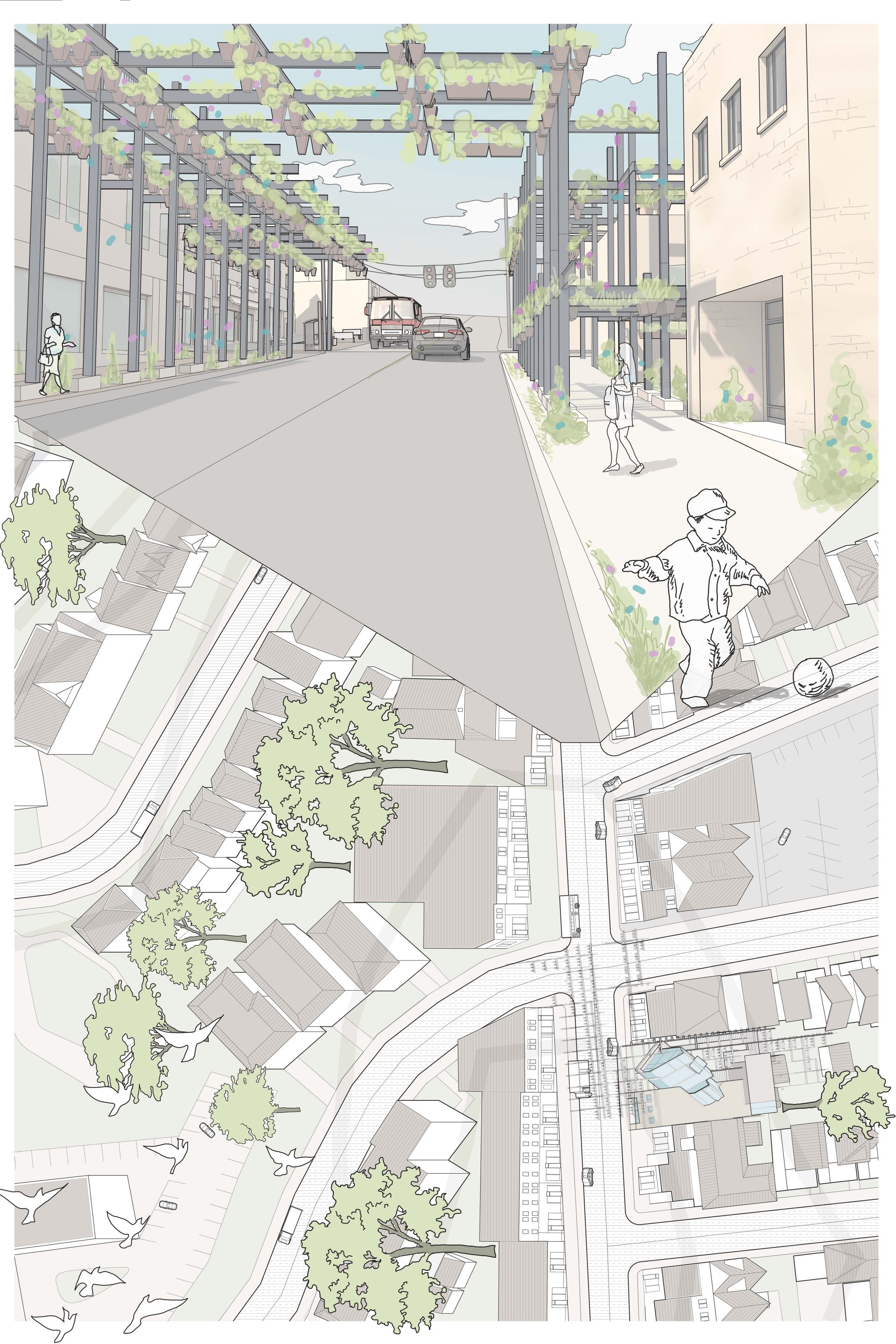 Digital: resolution: 2688 pixels x 4032 pixels
Software: photoshop, illustrator, rhinoceros 7
In our Once Upon a Pittsburgh studio, I question, how green infrastructures and ecological elements of vegetation take a non-passive role in our world-building, how can we speculate a dynamic ecological urban environment, developing from our current existing landscapes. The structure inspires a new form of the existing world, thinking about what happens if we rethought the growth of current intervention along with the current neighborhood? It brings the opportunity to an alternative landscape, extending small actions of people in the community to change the landscape of the larger neighborhoods.

Let’s hear from the new artists featured in this issue…

Living in Thailand. Trying to survive in this country making art.

Hi! I’m Alexandra! I’m currently pursuing a five year Bachelors of Architecture degree at Carnegie Mellon University, graduating in 2025. Architecture as a way of storytelling and understanding the place is something I have been interested in. I look forward to taking the design as a way to understand another story, the people, the place, while making sense of our world and environment.